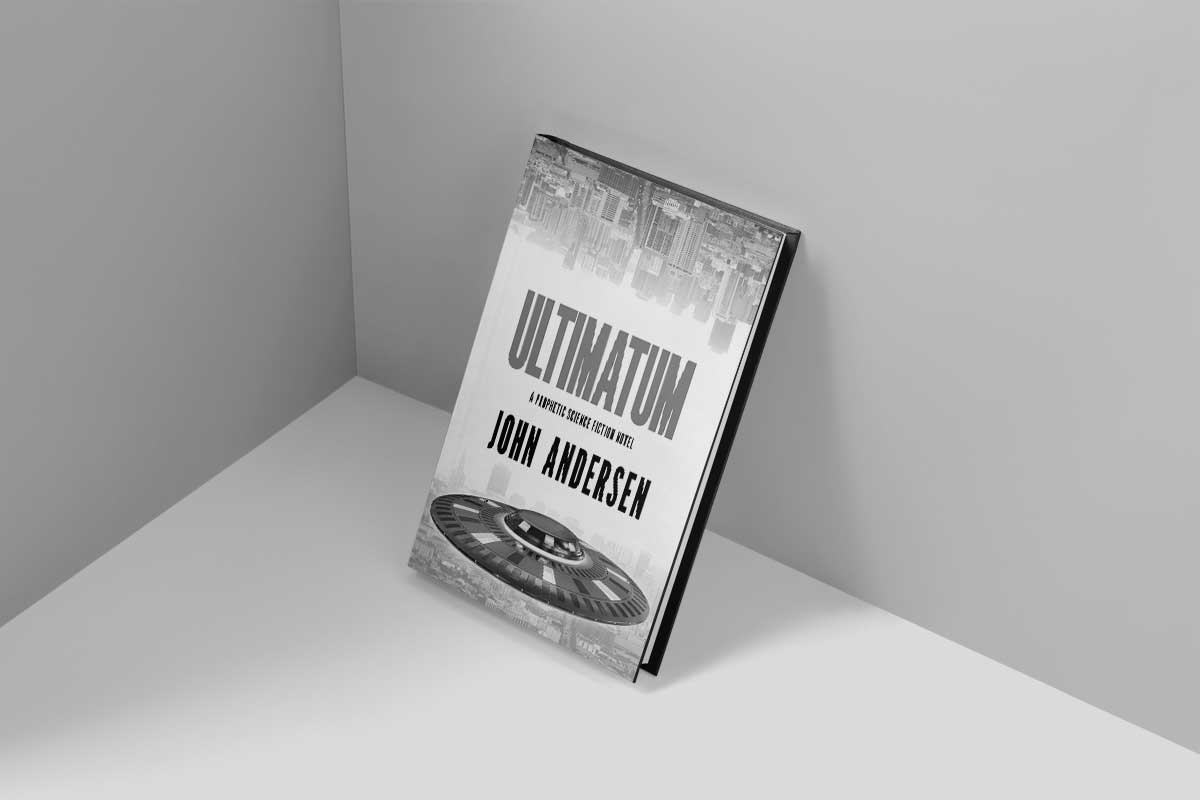 Imagine a world with no money, religion, borders, wars, discrimination or disease.

No, I’m not re-writing a John Lennon classic. I am talking about the plot for Ultimatum by John Andersen, who does a great job of imagining a world that has to deal with this becoming a reality.

When alien delegate Charlie was sent down to Earth, he never imagined the humans would comply with his demands. He wanted to give humanity a chance to eradicate all the wrong in the world by eliminating discrimination, hate, greed, immorality, and envy. The only way he believed they would comply was to threaten their entire existence by an alien invasion takeover. He would give them 10 years to right all the wrong and to unify with one another. Even the President of the United States expressed extreme displeasure about the demand. However, stricken with fear, even though the humans didn’t want to bend to the threat, they knew there was not much of a choice. Ten years pass…

Did the humans come together to force out the aliens or did the aliens return seeing not much had changed since giving the Ultimatum? Will destruction fall upon Earth obliterating human civilization?

Ultimatum is the latest sci-fi novel to tackle the issue of what would happen if aliens came to Earth. This time though, they aren’t invading, they want to make the citizens of the planet better people and bring them into the Continuum of the planets.

I like the mysterious man-like alien called Charlie – who is the main alien we deal with throughout the book. I like the idea that there is a ten year plan too, it helped make it seem more realistic.

There’s intrigue, assassination plots, little mysteries and interspersed throughout are little stories about certain people who have been affected by the aliens. Most of the stories prove that what the aliens are doing is for the greater good. There are prison ships holding the warlords, dictators and criminal who don’t want to change and poverty, starvation and disease is eradicated within three years.

Some of the stories involve a little sub-plot that implies that not all is as it seems with the aliens. I think they have selfish reasons, but are they good or bad?

Alongside getting rid of many things that have created Earth to be a destructive planet, the aliens admit things regarding organised religion – Charlie’s predecessors created it thinking it would bring people together – and historical figures are also proven to be aliens playing a part! I’ve begun to question my degree!

Charlie and his relationship with his alien teams and the world leaders including Sylvia Han-Chin, the POTUS and Boris Chevsonenko the Russian premier are well written and thought-provoking. I really like how Andersen uses them as an indication of what the other leaders and therefore the majority of the population would think about the changes. The leaders keep you guessing as well, at points where I thought they’d agree, they actually provided some dissent and it made quite a refreshing change that the POTUS was female.

***One quick note, this book is set in the future – 2049 I seem to recall – but King Charles is mentioned and that his mother, Queen Elizabeth II had recently died. She’d be 123! This may be fiction, but I thought that was slightly far fetched even for a sci-fi novel.

There are problems with a ‘perfect world’, lots of trades and industries are now out of business as there’s no need for accoutants, medical researchers, soldiers to name just three which are mentioned but with everything being free sports are more accesible, as are the arts. People are re-trained into other areas and jobs but is everyone happy? I also thought about what I would re-train as? Probably end up back in shipping!

The ending involving the actual ultimatum did feel a bit rushed, the major decision was over in a matter of seconds during Charlie’s last meeting with the world’s leaders but the whole book was well thought out and written. Oh hang on, there is an epilogue! Hoorah! This does a great job actually of winding up any loose threads and bringing all the little stories together so you can find out what happened to each person. Well, that makes me feel better!

A fantastic idea, laid out in a pretty unique way. It made me think of the implications regarding the reality of this and I ended up feeling a bit sorry for aliens when a unique disease seemed to strike some of them down.

Just a quick note as this does marr my star rating a little – there are a few grammatical/spelling errors that although didn’t impede on the plot, did mean that I had to re-read a few bits to figure out the overall direction that the particular sentence was meant to be going in. I’ll be happy to proofread any future books John!