The Cross Of Ciaran 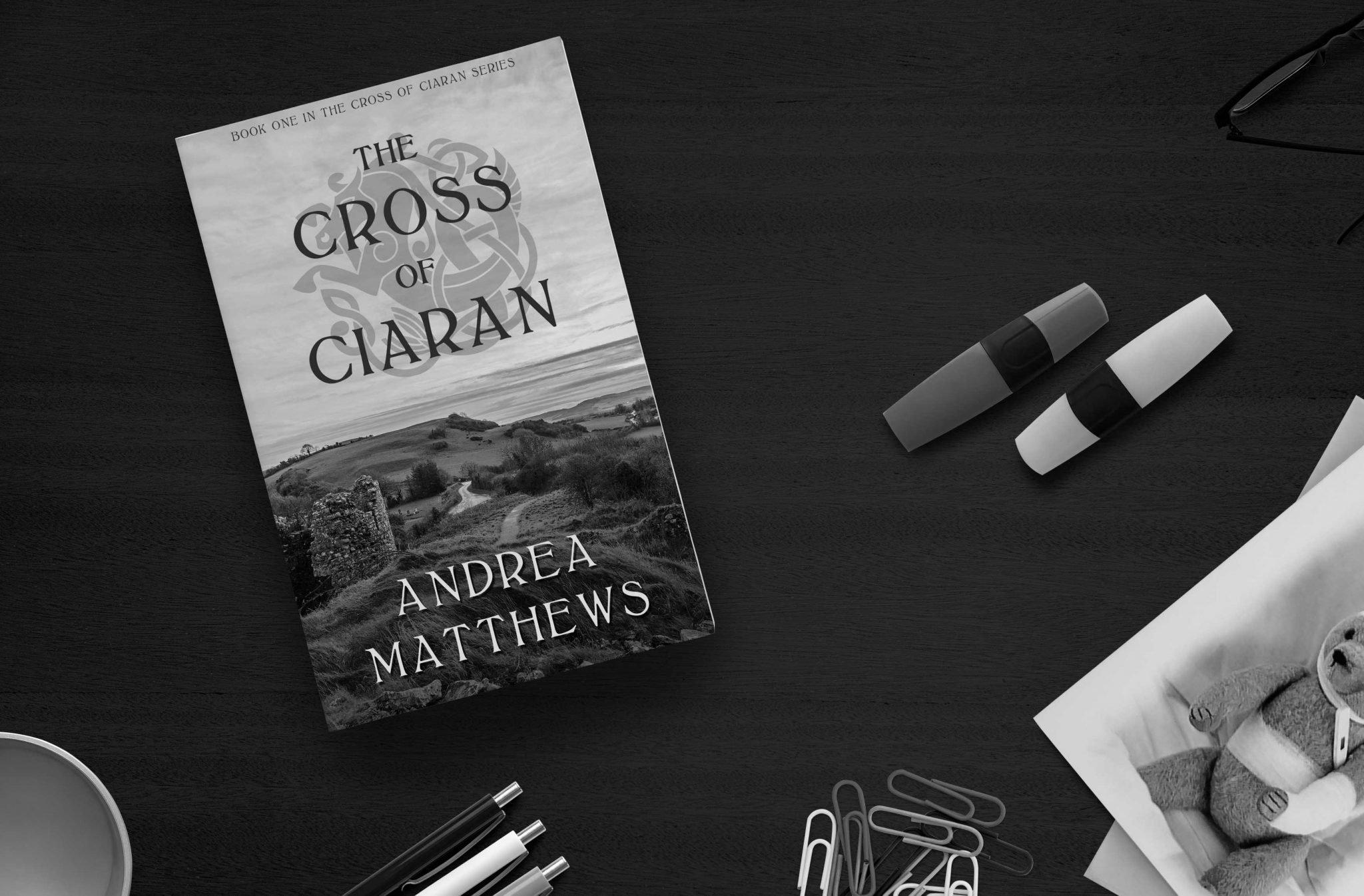 Readers – I’ve come to realise that a book with a glossary at the back is the absolute best thing ever!

The Cross of Ciaran is a time-travelling paranormal romance. I’m a sucker for a good romance novel and I love history (I’m procrastinating writing my next essay by writing this a week before it’s due out) so what is not to love? Not much, this book is fabulous!

This is the first in a new series by Andrea Matthews and I am already looking forward to book two, sign me up for that tour!

When a fifth-century pagan priest is unearthed in Ireland fifteen hundred years after being entombed, archaeologist Caitlin O’Connell is convinced it’s the find of the century. The body is in perfect condition, right down to the intricate tattoos adorning the Celt’s skin. In fact, if scientific data hadn’t proved otherwise, she would swear he hadn’t been interred more than a few hours.

Eager to discover more about the mysterious Celt, Caitlin accompanies the body back to the New York museum where she’s employed, but before she has time to study him, the priest disappears without a trace. Rumours surrounding the event begin to circulate and result in the excavation’s benefactor pulling the plug on the entire expedition.

The rumours are not far off the mark though. After being buried alive for betraying his goddess and his priesthood in the dawning age of Christianity, Ciarán wakes to a strange new world. Alone and frightened in an unforgiving city, he stumbles upon the only thing familiar to him and seeks sanctuary within the church walls. With the help of the parish’s pastor, Father Mike, Ciarán slowly grows accustomed to his surroundings, though he’s plagued by dark dreams and the disturbing sensation that an evil from his past has followed him into the future. But a more immediate danger lurks on his doorstep.

Caitlin is determined to get to the bottom of the mystery concerning her missing Celt, and when she meets her Uncle Mike’s new handyman, Ciarán Donnelly, she’s convinced the handsome Irishman knows more about the theft than he’s letting on. Yet, even she can’t deny the attraction between them, simmering below the surface and blurring the lines between her personal and professional life. But will Ciarán’s secrets draw them together or shatter their future forever.

First off, this book is about Irish history, which is not a subject I’ve studied even a little bit, let alone in depth so I really enjoyed reading about pre-Christian Ireland (and I’ll be looking into researching and studying it a bit more, once my current degree is over) and learning a teensy tiny bit of Irish.

The flashbacks between Ciaran’s old life and his new one were very cleverly done and merged well within the story, which isn’t often the case (and the sex scene was very well-written too) but they became increasingly disturbing as Ciaran started to remember exactly what he used to be like as a son of the Goddess.

The book is set in the 1960’s but it was easy to forget this, it may not have been a thriller/mystery (in the classical sense), but it was very tough to put it down, and I couldn’t not believe how quickly I got through it. This book is a classic enemies to lovers novel but I’m assuming a lot more will happen during the next book – especially as we do seem to have a mystery to solve by the end.

Caitlin O’Connell is passionate about her career, even if it means sometimes upsetting the ones you love. Which happens quite a lot! She clearly cares about those around her, even when she’s in the middle of a crisis, she is worried about Ciaran and her Uncle Mike and it’s honestly lovely to read a book where the main female character isn’t in publishing, PR or journalism and that she’s a professor and an acclaimed archaeologist. Makes a nice change, if I’m honest.

Ciaran is a tough nut to crack, sometimes I thought he was a bit too harsh and I had to remember that he’d just woken up fifteen hundred years after he’d been encased in a tomb and woken up in a place that didn’t even exist when he was alive. His relationships with the other characters is an important part of the story and the way Michael and Dennis took him in, believed in him and helped him deal with the transition of dealing with modern life (and learning English) was nicely done. I don’t want to give too much away, but the scenes of him braving it in New York were funny, yet heart-breaking in a way. It must be so difficult for anyone to be in a situation where their life changes irrevocably like that, and everything you knew has been turned upside down.

I love the way Ciaran and Caitlin’s relationship starts to progress and grow towards the end of the book. Out of everyone, my favourite character was Father Michael (Uncle Mike), he had a Father Brown-esque quality to him that I just adored! He wanted to do right by everyone, and his little quirky ways often made me laugh out loud.

Andrea Matthews weaves a fantastic story, there isn’t one part I didn’t like about it, the story flowed beautifully from present to the past and I am fully involved in Ciaran and Caitlin’s love story. What will happen next? And what happened to the other findings from the caves? I eagerly await the next instalment.

A thoroughly deserved five stars out of five. One of my favourite books of the year so far!