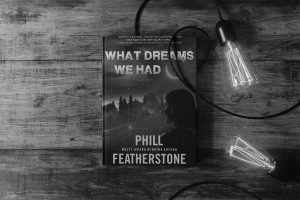 What Dreams We Had – Phill Featherstone

Five young people are in the dead period between finishing their exams and getting the results that will determine what they do next. It’s a time of anxiety but also a time of hope. And it’s the end of an era because whatever happens they will go separate ways. Meanwhile, there is a long summer vacation to fill.

Out of the blue, they receive an astonishing invitation. Four of them are in a band and a wealthy celebrity wants them to play at an event to be held at his home in Tuscany. All their expenses will be paid and they will live in a luxury villa. It sounds too good to be true, and it is.

They go to Italy, but when they reach the villa they find it’s empty. The location is remote, and with no transport, no internet connection and no mobile signal they are cut off from the world. A succession of mysterious events begins which forces them to review who they are and to rethink what’s important to them. It’s not until the final chapters that we discover the real reason why they’ve been brought to the villa and exactly what the experience will mean for them.