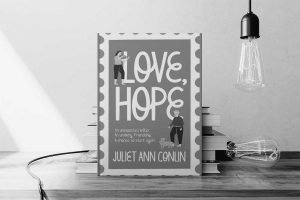 An unexpected letter. An unlikely friendship. A chance to start again.

Ever since she first picked up a violin, Hope Sullivan dreamed of going to music college, joining an orchestra and travelling the world with her best friend Janey. But when her parents were killed in a car accident on the way to one of her recitals, she gave it all up to look after her younger sister, Autumn. Ten years later, Janey is living their dream on her own, Autumn is flourishing as a doctor and Hope’s life is smaller and less musical than ever.

Arnold Quince had the happiest of lives – until he lost his beloved wife Marion. Once the life and soul of the village, he withdrew into his grief and pushed all his friends away. Now, five years on, he is sick, lonely and just counting down the years until he can be with Marion again.

When Hope and Arnold are pushed into writing to one another, neither has any idea how much their life is about to change.